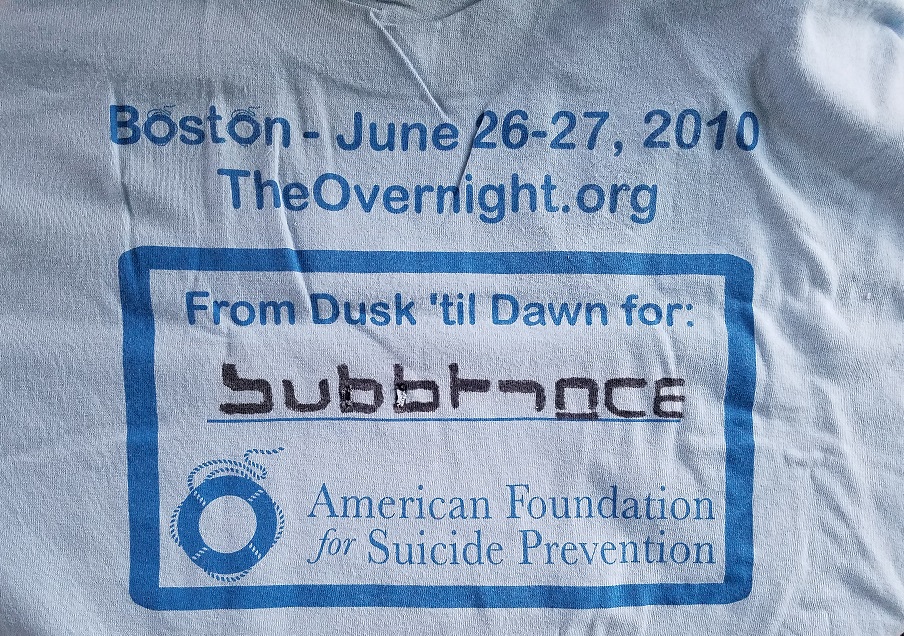 I’ve become so deeply immersed in the education of the suicide prevention movement over the past six years that it’s hard to remember a time when I wasn’t involved. My reasons for initially discovering the campaign were both serendipitous and personal, and it turned out to be, what I believe to be, one of the most meaningful accomplishments in my life.

Six years and five overnight walks later for the American Foundation for Suicide Prevention, I’ve heard stories of loss that would break the most jaded heart, traversed more miles in the name of a cause than I ever though possible and met some of the greatest and strongest people imaginable who I now consider the best of my friends.

While on the 69 to 99 Moving Finds expedition, I came across the shirt for the first walk I did in late June of 2010, and it definitely brought up some memories. 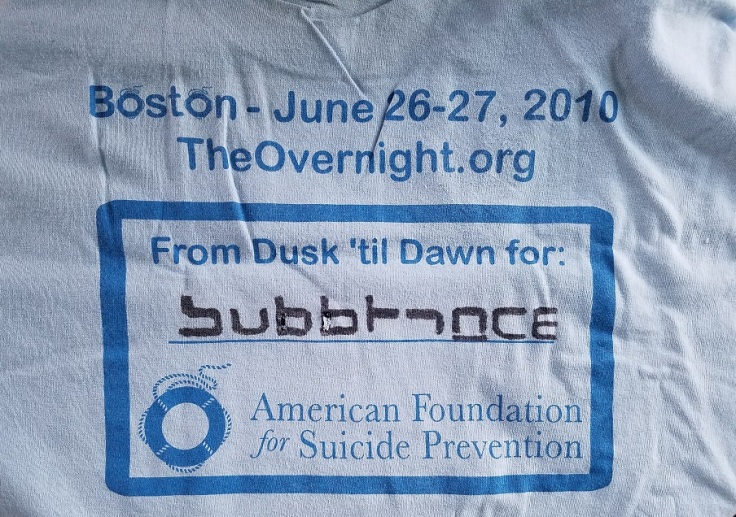 I didn’t know anyone else who was walking. And the cause itself, it seemed a bit…too different, I guess, one that I wasn’t exactly comfortable asking any of my friends to do with me.

Managing to raise the $1,000 minimum required to take part, which surprised me, the shirt to walk in arrived, and I had to fill in who I was going to be taking the journey for. “Well, what the fuck?!” I thought. “What do I put there?”

I decided to play it safe, but true, entering a nod to Joy Division’s Ian Curtis, who had hung himself the night before the band was due to depart for America on an inaugural tour of the States. Then again, I couldn’t be obvious, because I like to be a complex idiot.

Therefore, I decided to be walking for “Substance,” the name of both the Joy Division and New Order (the band whose widowed bandmates formed in the wake of Curtis’ death) best of compilations. I then began to write out the font in permanent marker in the style of the former, from memory.

If you look close at the image above, both the “b” and “s” are fucked up; I reversed them. In marker. Thankfully, with an X-Acto blade, I managed to pull small swatches from the hem on the waistline of the shirt to both cover-up and fix the errors. This is what I was going for:

Not quite – eh? But, hey, my heart was in the right place. And I won’t soon forget the walk that stretched out from dusk ’til dawn throughout Boston when I needed it most. It led to me realize how much so many other people in this world have not only been touched by mental illness, depression and/or suicide, but how many are also willing to donate to such an important cause. I did offer a download of my walk playlist, which has reminded me to do it again for 2017, so maybe that helped?