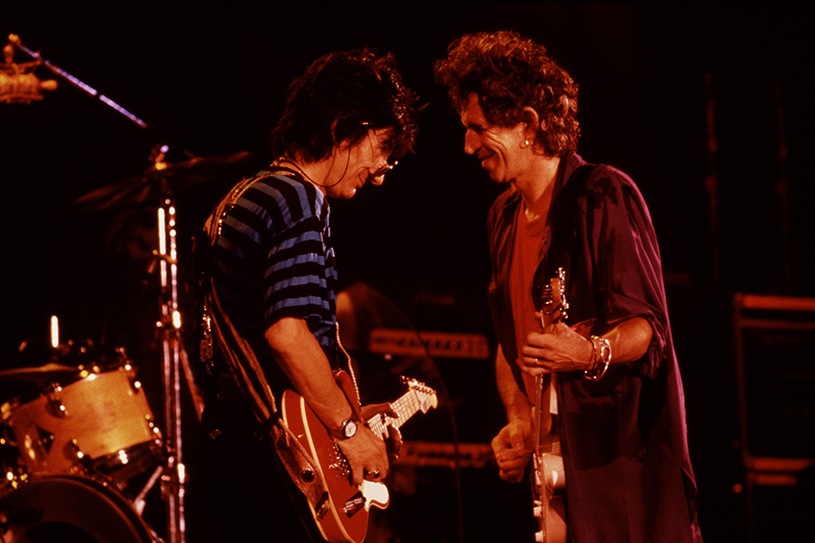 When the Rolling Stones announced their return to the road in the summer of 1989, it was the guaranteed to be the hottest ticket in town as the band had been absent for an excruciatingly long seven years. The run to support the album Steel Wheels was filled with Philly tie-ins – it kicked off right here at the since demolished Veterans Stadium in fact, and now one of the highlights has come to Blu-ray and DVD under the banner Steel Wheels Live.

The final three shows of the Steel Wheels Tour in 1989 took place December 17, 19 and 20 at Atlantic City’s Convention Center, a location now known as Boardwalk Hall. It was the middle show that had people talking though, due to a slew of high-profile guests including members of a then white-hot Guns N’ Roses, along with two guitar legends from different generations.

Guns N’ Roses’ frontman Axl Rose and guitarist Izzy Stradlin accompanied the Stones in A.C. for the first-ever live performance of “Salt of The Earth” from their 1968 ‘Beggars Banquet’ album. Eric Clapton brought his slow blues burn to a cover of Willie Dixon’s “Little Red Rooster” and then joined in to back up one of their collective idols, blues legend John Lee Hooker on “Boogie Chillen.”

Having been the first tour hitting the US since 1981, the Steel Wheels Tour was famous for one of the group’s longest and most ambitious setlists at some two and a half hours. The Stones not only rolled out their expected hits, but dared to drop several new songs from the then-newly released Steel Wheels album with renditions of “Terrifying,” “Sad Sad Sad,” “Mixed Emotions,” “Rock and a Hard Place” and “Can’t Be Seen.” Time hasn’t been that kind to most of them, with the overly opulent vestiges of the 80s in the air, but what a time capsule to witness.

Still, it was on the verge of a new decade, one which saw the jaunt stretch into the summer of 1990 ending up with 115 dates in total, showing the Stones were not going to enter into the rock and roll graveyard as gracefully as so many had been predicting for years. Seeing Mick Jagger and Keith Richards muscle their way through the familiar “Brown Sugar” and “Paint It Black” put to rest any talk of them disappearing. ‘Steel Wheels Live’ has been restored, remixed and remastered and is available as a limited 180gram 4LP set on colored vinyl, DVD + 2CD, SD Blu-ray, 2CD and digital formats. Additionally, the set can be found as a special limited 6-disc version, which includes the Atlantic City performance on DVD, SD-Blu-ray, 2CD, a DVD of their Steel Wheels Tour performance at the famed Tokyo Dome in Japan, as well as Steel Wheels Rare Reels, a CD featuring tracks which didn’t show up on the core tour setlist.

This article appeared in yesterday’s print edition of The Daily Times in my weekly Rock Music Menu column under the title “The Rolling Stones release famed Atlantic City show from 1989.”